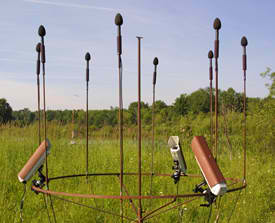 Animals in many vertebrate species vocalize in response to predators, but it is often unclear whether these antipredator calls function to communicate with predators, conspecifics or both. We evaluated the function of antipredator calls in songbirds by measuring the acoustic directionality of these calls in response to experimental presentations of a model predator. Acoustic directionality quantifies the radiation pattern of vocalizations and may provide evidence about the receiver of these calls. Overall, the birds produce antipredator calls that have a relatively low directionality, suggesting that the calls radiate in many directions to alert conspecifics. However, birds in some species increase the directionality of their calls when facing the predator. They can even direct their calls towards the predator when facing lateral to it—effectively vocalizing sideways towards the predator.